Nature Watch: A Room with a View

I have been allocated a room with a good view of the garden at the new Caswell Clinic which gives me a pleasant view of the surrounding fields and the tree-lined paths along the Ogmore River.

On moving in, one of the most striking images that caught my attention was that of a snail climbing slowly up the window looking for a place to hibernate. Spiders have inhabited the building since construction began. I like spiders indoors because they trap flies and maybe eat dust mites and other more harmful bugs.

I have mentioned the security fence before and have noticed that nature has even been able to colonise this type of manmade structure. Algae and lichens soon form; insects and spiders live in the nooks and crannies, and birds come to feed on these and seeds blown by the wind. I watched a magpie looking for titbits, one morning. It was a comical sight as he waddled along the thin wire, bending over precariously to grab a morsel. He also explored the tops of the posts and paid no attention to people and dogs passing by.

I have also spotted long-tailed tits and blue tits landing halfway up the fence, clinging on in their characteristic way, hurriedly feeding and looking out for danger. They seem to peck twice, look up and around, peck again, look up, etc. It is a heart-lifting sight to see such beautiful, delicate creatures surviving on a long winter's day.

A variety of birds have begun to visit the new garden this winter, a dunnock often perches on the bench outside my window to sing his sweet songs.

A peregrine falcon swooped on a dove in the shrubbery near the greenhouse one afternoon but missed. One day, Graham and Razia disturbed a peregrine falcon which had just caught a dove. The peregrine gave them a 'nasty look' but did not immediately fly away. Last week many of us watched it eat a successful kill in the garden.

The thrush has been singing since before Christmas and I heard a blackbird making a few tentative phrases one day. I have also heard robins singing all winter and the dunnock outside my window. Tits and chaffinches have begun to sing, also.

I watched some gulls on the roof of Ogmore ward, one afternoon. They had a variety of calls and body language that seemed very sophisticated. I like to hear their plaintive 'mewing' cries as they float higher and higher on the up draught. I also like to hear the deep "cark-cark" of the carrion Crow as it lumbers across the skyline at dawn or early evening. It is a strangely comforting sound to me.

Russell and I have heard terrible screams outside the fence at night; either a fox or owl killing rabbits and other prey. I have also watched a bat catching moths around the security lights quite far into the winter. On December 23rd I was pleased to see a flock of redwings on the ash tree just outside the fence to my left. It is a beautiful thrush and often visits fields in the winter.

Well that's all the news from 'A room with a view'. Next issue I shall write about my jaunts further afield...I hope you enjoy. 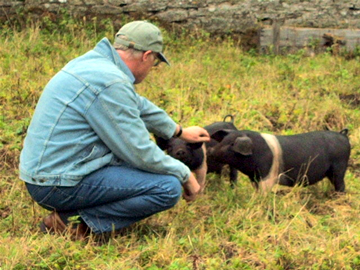 Gleamed from AndyH (Hard Copy Ed Caswell Chat), this was Rob's last article before moving onto Abergavenny. When Rob was at Caswell he was a good friend to have around. Rob's bizarre sense of humour helping to smooth out the lumpy bits life tends to throw up at us.

I got to visit Rob three or four times since he left and at the time of writing he will be coming to visit me this time (I have been grounded ,another story). When Rob is here I shall do my best to persuade him to carry on with his writing for the Chat.

Rob (half Hidden for patient confidentiality taken on my first visit) at his new place where he has just adopted and saved from certain death, two piglets of about 20 sausages worth. Apparently these two little porkers are now huge and too big for Rob to handle.