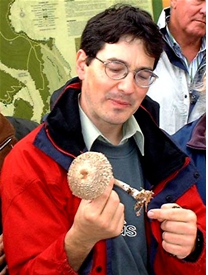 Autumn for many people is a time for reflection preparing for winter´s short days and perhaps looking back at the season past. But not for me, as autumn signals a second spring, a time for activity, exploration, and discovery of hidden treasures. The treasures that I seek are the mushrooms and fungi of our woods and pastures and it is in autumn that they appear in their greatest variety.

My interest in these organisms started some twenty years ago, whilst working as a gardener at Clyne Gardens, Swansea. The gardens, well known for their Azaleas and Rhododendrons, also gave rise to many kinds of fungi which I came across during the course of my duties. With encouragement from the head gardener and a friend´s copy of the "Collins guide to mushrooms and toadstools" (1963), I tentatively began to name and list some of my finds.

Soon weekends were spent searching for new specimens of every kind, in locations all over Swansea and Gower. Part of the fascination for me is the sheer number and diversity of fungi. Well over three thousand species of larger fungi occur in Britain alone, with at least 100,000 species named worldwide (so far!). Most people can visualize the mushroom or toadstool forms with cap, gills and a distinct stem but are unaware of the incredible variety of shapes, sizes and colours of these marvels of nature. They can resemble brackets, golf balls, coral, bird´s nests, shallow cups, spindles and lumps of jelly! Add to this their variety of colour and texture, plus their sometimes bizarre lifestyles and colourful folklore and you have a subject of never ending interest!

Since 1990, I have been leading Public Fungi Forays all over South Wales, many organised by local authorities or by Naturalist groups. These forays and many others organised by the B.M.S (British Mycological Society) help record the fungi "flora" of our region, which is still for the most part poorly known. This is mainly due to the lack of interest and therefore lack of records of fungi particularly in Wales in years past.

Fortunately this is changing, with the formation of groups such as the Glamorgan Fungi Group, which since 1995 has been collecting records of fungi throughout the country. This work is important in establishing the distribution and variety of fungi so that conservation measures can be put in place to protect vulnerable species and their habitats. Above all, and parallel to the recording side, must be education, for people will tend to preserve and protect the things they know about and value. This is why I think that public events like the annual Foray at Bishops Wood local nature reserve are so important.

I will now briefly describe the recent foray at the above reserve held on 9/10/05, to give an insight into the event. At 10a.m. on a bright but cloudy day, about 35 people of all ages including children assembled in the Bishop´s Wood Countryside Centre car park, above Caswell Bay. They were greeted by me and the two wardens of the site, Dai Morris and Karen Jones. Many people had come already armed with forayer baskets or various containers to collect their finds, hoping for some edible species no doubt!

Bishop´s Wood consists of a steep wooded valleymushroom man on limestone, situated directly behind Caswell Bay and its car park, covering about 20 hectares (50 acres). The foray is one of many environmental events held throughout the year here. After a short walk to the preserve entrance, I gave my usual address about fungi, and tips about collecting in general, to the group, who after been given a time for rendezvous at the Centre, split up to scour the wood.

Having so many pairs of eyes available and good prevailing conditions (rain and warmth) I hoped for some interesting finds. After an hour and a half people began returning in scattered groups to the Centre, where a large display board had been placed outside to accommodate our haul for the morning. A seemingly endless number of boxes and baskets were duly emptied onto the display board with all manner of unusually shaped and coloured objects, most of them fungi!

After all the specimens had been deposited I began selecting from the large array in front of me the various groups of fungi and the "star finds". One that immediately stood out was a fine specimen of the world´s most poisonous fungus, the Death Cap. With its olive green cap, white gills and white ring on its stem and its white volva or bag at the base of the stem it is unmistakable to the keen mycologist. This find enabled me to demonstrate all these features to a captive audience, as edible and poisonous species are always of special interest.

In the edible category were found several puffballs, the "Shaggy Parasol", with its brownish scaly cap and flesh which turns a saffron colour if cut, and aptly named Lawyer´s Wig or Shaggy Ink Cap. This is only edible when young as its elongated bell shaped caps quickly turn into an inky black liquid within a few hours!

Amongst the large selection in front of me one rarity stood out. Only an inch high with a lilac blue cap and stem, its identity can be confirmed by simply sniffing it! It smells strongly of freshly laid tarmac, the instantly diagnostic feature of Cystolepiota bucknallii (no common name!). This was just one of nine fungi recorded on that day at Bishops Wood new to the reserve.

The event finished with people taking photos of the display and carrying some specimens home for further examination, but not before I reminded everyone of the importance of only collecting for eating specimens that they can safely identify or get identified for them!

It only remained for me to thank everyone, wish them happy mushrooming, and a hope to see them at the foray next year.

I hope this short article gives an insight into a fascinating pastime played out all over Britain and particularly other parts of Europe at this time of year.