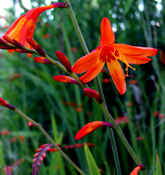 This year has been the first full year within the new building and setting up the therapeutic garden has required a lot of hard work, muddy boots and dirty hands! The two green houses enabled us to produce a lot more plants from seed, than in previous years. These were transplanted into the garden areas and a few were potted and sold to staff and patients families.

This year we tried growing new vegetables, such as marrow and cucumbers, which were a success. As usual the high yield of tomatoes was flower cossiaccomplished and enjoyed by those attending the group! Some of the vegetables grown from seed included, leeks, runner beans, lettuce and onions, these were transplanted into the garden and were very tasty. The carrots grew incredibly well and with their green leaves looked very appetising.

Due to the amount harvested there was plenty to give to the wards and with donations given by the staff the patients were able to enjoy refreshments and buffets throughout the season.

red flower headThe beautiful flowers on show in the garden are nurtured from seed by the hard working group. The display was on show for all to see and attracted a lot of praise and attention. Reception and the wards benefited from the good will of the group members who suggested they be taken inside for all to enjoy.

It was noted group members were able to carry out tasks independently, even though some had little previous gardening experience. This was due to the immense support within the group by its members, which everyone benefited from. The patients have reported the immense satisfaction they felt from the results of their hard work and are itching to get their wellies on and hands dirty next year!

Green fingers would like to take this opportunity to thank the members of the gardening group, their enthusiasm and good humour made it a pleasure to facilitate.