Well finally it went ahead after the delays of last Christmas at Caswell Clinic. Staff and patients joined in for a fun evening. The chief organiser Dale highlights the variety show below.

Apart from a few technical hitches, such as the computer telling us "No" when we were attempting to show 3 specially prepared movies, getting Mark, the Music Station Manager to pop in from his busy shop as we couldn´t get the p.a. system to work (who politely told us that we had been plugging into the wrong holes)! People daydreaming when they should have been pressing buttons and on a few occasions when three musicians were all playing in different keys, it went very well and enjoyed by all.

The show opened with Albert Ross (Dale) and only one Hot Banana (Donna) due to sickness, doing a Rock N´ Roll set. Mr Piano Man (Andy) who also told a few hilarious jokes between tunes. Bob the M.C. man a true professional singing a couple of classic songs. jo performing at showMargarita Pracitan (Jo Thomas) did us proud with her interpretation of the zany South American songstress. O.T.T. (Heather, Nicole & Carmen) a truly professional dance act. Cowboy Mike – Hilarious ventriloquist sketch with Mike and Dale Chris (Mr Guitar Man) played guitar instrumentals in a way, which only he can. Jock (RobC) came out dressed as a wild Scotsman who led everyone into sing along songs. 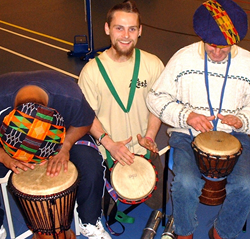 Finishing up the show were the Mississippi Mud Slingers Hillbilly Band consisting of Dale, Mike, Richard, Jonathan, Kamal and Melvyn who gave heather on the fluteus a few traditional American Folk songs ending with "Amarillo" where everybody tried to join in but were perplexed by the fact that everyone was not only playing their instruments in different keys but singing in different keys as well! But that only added to the fun.

The buffet was very enjoyable (A big thanks to Jill and Emily who prepared it at very short notice) A big thank you to everyone involved for their support and I am told that we should prepare for the next show.