The Amiga 500 was first released in 1987 and is the spiritual successor to the Commodore 64. I have a number of Amiga 500 games and programming tools. Here is my review of the FA18 Interceptor...

Flight sims are a rarity on modern consoles probably because gamers do not have the patience to sit and learn how to fly a plane with realistic physics preferring a quick blast instead.
As you can see by modern standards, FA18 Interceptor’s graphics are basic but you must remember this was released in 1988.

The game features 3d solid graphics of the San Francisco bay area, including the Golden Gate bridge, Alcatraz and the Pyramid in down town San Francisco. You may fly an FA18 interceptor or an F16 Falcon and the game features 7 combat missions of varying degrees of difficulty.  The weapons carried on the FA18 or F16 are AIM 120A AMRAAM medium range missile and the AIM-9lL sidewinder anti aircraft missile. The aircrafts are also armed with a GE-M61 20mm Cannon for in close dogfights.

To play the game you really need to read the manual to just figure out the keys. To start you must complete training manoeuvres where you follow an instructor and perform the following:
♦ Aileron Roll 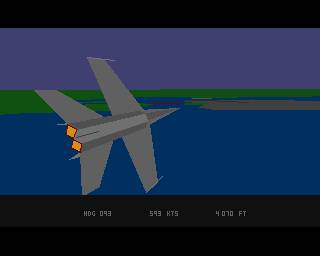 After you have completed training, you can select one of four missions out of the seven:
♦ Visual confirmation
♦ Emergency Defence Operation
♦ Intercept Stolen Aircraft
♦ Search and Rescue Operation

An example mission would be Visual Confirmation where you’re assigned to find and identify an aircraft and return to San Francisco International unscathed. The aircraft you identify may be friend or foe. Your aircraft is fully armed but you may only shoot when fired at. The Emergency Defence Operation mission has you protecting Air Force One and the President from multiple enemy bogey MIG attacks. You must hold them off until the president’s plane has safely landed at San Francisco International or SFO.  Intercept stolen aircraft has you convincing two defecting F16 aircraft to return to base by shooting down co conspirator bogeys and flying in front of them informing them the game is up, if they refuse to surrender you must stop them at all costs.

Search and rescue operation has you locating a downed friendly pilot and deploying a rescue pod within his vicinity. As always, there are enemy MIGs out there to try and stop you.

Overall this is a satisfying game with good sound fx and graphics for the time a few bugs and was rated:
84% Amiga Action
8/10 Commodore Computing
8/10 Amiga User International
9/10 Commodore User
90% Zero
96% Amiga Computing.
I rate this game a solid 8/10.