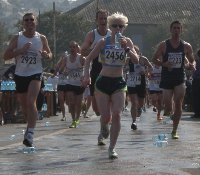 Late January 1993 found me sitting on a chair in my underwear on the patio at three in the morning, the wind howling and the temperature down to minus four. I was still burning up and sweating profusely. I should have known things weren't quite right.

Two days later I managed to stumble painfully out of bed, every bone in my body screaming out in agony to get to the phone. The next thing I remember was waking in up in intensive care. Hooked up to drips and monitors and surrounded by people in white coats I knew this was serious.

I vaguely recall a priest next to my bed solemnly praying and talk of wills and the poor children.

Somehow I pulled through those darks days, due to my youngish age and being very fit. Several months of barrier nursing, doctors scratching their heads and now down to under ten stone I was transferred to Frenchay hospital for a last chance operation.

Frenchay was at least fifty years old, the wards typical of the fifties, stark and meticulously lined up as if they were on a parade ground awaiting inspection. I made acquaintance with the patient in the next bed, in the morning his bed was empty. He didn't make it through the night. It was that type of ward.

The night before my operation I made a pledge to myself that if I got through this I would get fit again and run a marathon.

The operation went well albeit minus half of one lung. Rehabilitation was painfully slow but my goal to run a marathon became all consuming. The first objective was to walk to the park a distance of one hundred metres without stopping. I built up from there to a quick walk around the park, then a jog and a walk. Then came my first run, my lungs bursting, and legs feeling as if they were made of lead, but I did it.

After a number of ten kilometre, ten mile and half marathon races it was time to apply for the marathon. The big day arrived and I lined up with many others as the famous footballer Stanley Matthews set us off on the Potteries marathon. I quickly got into my stride and completed the half way stage in less than one hour and forty minutes. I thought this is easy. Then at twenty one miles I felt that I was wearing a diving suit, every stride was difficult and I suddenly felt very cold and clammy. I had hit the wall; it was true what experienced runners had told me. "I will get through this" I kept telling myself, visions coming to me of being seriously ill in bed before the operation at Frenchay hospital.

I finished the run in three hours and fifty four minutes. I was euphoric, I had achieved my goal.

I'm now back in training for further running events {subject to injuries!} as I ease out of another difficult time in my life. It seems that long distance running is a cathartic process on the road to recovery. Try it, it may help you too.