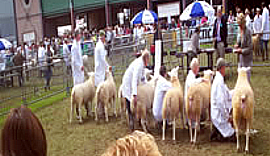 Hello. Its that time of year again when I visited the Royal Welsh Show. I got up at 6.30am and it was pouring with rain. Gail and myself decided not to go to the show but visit my parents who live near Brecon.

When we arrived at home the weather cleared up so we decided to go to The Show. We were lucking in that the weather remained fine apart from showers in late morning and also at 3 pm. However we were undercover.

We stopped off for lunch at the NFU Mutual stand where we had sandwiches (I had ham), cream cake and coffee.

We then split up and dad and myself looked around the livestock pens whereas mum and Gail went around the stalls for 2 hours.

Dad and myself watched a sheep dog herd a gaggle of geese into a pen before four sheepdogs shepherded flocks of sheep in the arena. Two of the four people were in fact shepherdesses!

We then walked to the lumber jacks and saw the poles climbed; as we walked there we observed a group of dancers doing 1950's style music.

Meanwhile mum and Gail wandered around the trade stands. It was an opportunity to see "labour saving"gadgets and innovations and most importantly to find out if they work!!

The many stands offered something for everyone from DIY tools and garden equipment to the very many varied kitchen gismos. It was fascinating to watch the store holders plying their wares. However, they were not tempted to buy despite sampling and testing out some of what was on offer!!

The flower tent was a blaze of colour and outstanding displays and they marvelled at the intricate craftsmanship of the goods in the Welsh Craft tent.

Mum and Gail met up with me and my father in the Sainsbury food stand which gave a food demonstration using Welsh produce. The lovely food was sampled afterwards before departing to the car park.