Angela Hughes - One of the Originals 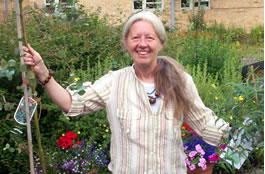 After being at Caswell Clinic since if first opened in 1992, Angela Hughes signed in her keys for the last time in June this year. Angela was one of the "originals" still working at the clinic. She embodied all of the high ideals that did and still do motivate people to do the best job possible in all circumstances.

The high regard in which Angela is held was symbolised by the warmth, humour and emotion of her leaving party on Cardigan Ward. It was a special atmosphere full of laughter and kind words. Angela was clearly overwhelmed by it. She spoke movingly of her time at the Clinic and of how grateful she was to everyone. Her speech was brief as she was fighting back the emotion. However there was one last surprise for her and I was happy to play a part.

I asked Angela to come to my office on the pretence of offering her thanks for her service on behalf of the Clinic. While she was with me, a large group of patients and members of staff congregated in Reception for a final farewell. Angela entered Reception to a rousing chorus of cheering and applause. She left the building with the sound still ringing in her ears and tears welling in her eyes.

It was the single finest moment I had witnessed in all my years at the Clinic and is with me now as I write this.

Good luck to Angela in everything she does and thank you to everyone that gave her such a memorable send off.