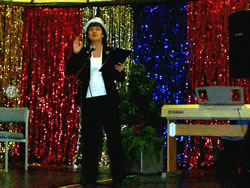 Our resident compere, Mags, made a magnificent entrance as usual, this time being wheeled in on a sack truck! Slappin' Skins, our African Drumming group, opened the show. Colourfully dressed, with African tribal painted faces. The group re-enacted the story of 2 tribes that had been at war for 200 years and at a final showdown made a lasting peace. This performance has been entered into this years Koestler Awards. 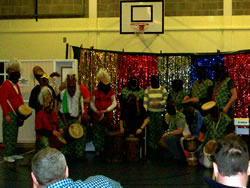 Following our drummers on stage was Jock (Rob C.), dressed in full Scottish attire including bright orange hair and beard, who led the audience into a good old fashion sing song, encouraging everyone to "Roll out the Barrel". After Jock, we had Lisa and Doreen bringing a lot of life into their version of "Valerie" to rapturous applause.

The "Doctor Sketch" was next with numerous patients and staff acting as G.P. patients. Laura, the receptionist, bringing in "the patients" to see Dr. DaleP with various hilarious complaints, such as Rob S.; The nun (Rob C.) Huw, Andy H. Dave S. the moth (Andrea C.); the Witch (Jayne), Kay (looking good as an old woman), Tracey OT. the Mexican Rob S. with Dale breaking off to do his impression of Michael Jackson complete with moonwalking and breakdancing! Angela also slotted herself into the sketch to dance her version of "Tales of the Unexpected".

After the interval, we welcomed on stage "Norfolk & Goode" (Huw & Angela) singing "California Dreamin" with perfect harmonies. Laura and her Yes/No game followed, accompanied by her assistant Rob S. who hit the bell when contestants mistakenly uttered yes or no! We were fortunate to have Jayne, dressed as a gothic fairy, reading her humorous poems.

Simon was the next act, performing his own composition "Annoying Me" on guitar with Will on bass and Adrian T. on drums. To conclude the show, was our resident hillbilly band "The Mississippi Mud slingers" led into a jam by Dale on guitar/ harmonica, Adrian T. on drums with Huw and Melly improvising on vocals.

Many thanks to all who contributed to this year's show, such as Rob S. for his hilarious "Dr Sketch" script, David F. for his perfect timing with his special effects.

And most of all, the enthusiastic and supportive audience!