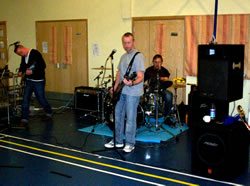 It was music for the masses on Wednesday on 25th of June evening in the Sports Hall with Andrew on lead guitar and vocals, Stefan on rhythm guitar, Paul on bass and RobE on drums.

The first song was a Foo Fighters ditty called learning to fly and they were quite a rocking band, even though they did a session of caver tracks ranging from Jim Hendrix (in which no guitar was set alight) to the House Martins.

The audience seemed pretty well pleased with the set pieces, asked if they had a CD of written tracks. The Bridgend band said there was no recording as yet.

It was an enjoyable evening and the band were a tight foursome, ranging from mature die hard rockers to youth inspired guitar riffs from Steffan.

If they play at the Caswell Clinic again, do yourself a favour and check them out. There have been professional bands with a recording contract who have not been as good as Swanky Tunes.

Thanks lads for a really enjoyable evening.