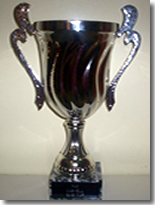 Yes, it was that time again when the friends of Caswell threw down the gauntlet and challenged the boffins in Caswell Clinic to a Quiz night. Every thing was fine except that The Friends had brought a secrete weapon- the 2008 Master Mind champion – yes that´s right the MasterMind Champion for 2008, David Clark from Port Talbot. It was celebrities all round with John Devereux, ex Welsh rugby player ably assisted with his wife Alison.

There were 5 tables battling it out - three from the friend s and 2 from Caswell.

It was a relatively close affair but the champion as if you wouldn´t believe it was David Clark´s table.

As always Caswell teams look forward to the next contest but with no, dare I say it, ringers!!