Welcome to the spring edition of twitcher when hopefully by the time this is in print the most eventful season of the year should be well under way. As usual, the abundance of wildlife around us is ever present and producing something new.

During the colder days of winter, chaffinches fed in flocks of twenty or more birds beneath the trees in the hospital grounds, flashing the white bars on their wings as they took off. Amongst these, goldfinches and linnets could be spotted, preferring the safety of the flock to feed. In the gardens the resident birds spent their days scouring the shrubs and grass for food, and I was lucky enough to watch long-tailed tits feeding not five feet from me on one bright February day. Our garden birds should now have paired up with the annual disputes over territory and suitable nesting sites being fought out.

At the beginning of the year, the song thrush could be heard each day whatever the weather. This bird, which is being constantly reported to be in decline, has an amazing song of repeated short phrases, which in the early part of the year seems to dominate all birdsong. Its cousin, the mistle thrush, is a slightly larger bird with a longer body and has a pale grey rather than brown back. Its song is also made up of short phrases but they are longer and richer, with a wild, haunting quality to that of the song thrush. Birdsong has noticeably increased over the weeks with greenfinches, chaffinches and various other birds joining in as the day length increases and the breeding season begins.

One bird which I'd not seen before coming to Caswell Clinic is the raven. I heard them first with their unmistakable deep, grating call, and then spotted a pair flying just above the tree line over the other side of the river. This was late autumn last year and I have heard and seen them regularly since. They are such an impressive bird with their sheer size and harsh call.

Throughout the winter months, some of the wild flowers managed to flower in sheltered pockets around the gardens. Speedwell, groundsel and various cresses attempted to brighten up the colder months. These and countless others will soon fill the gardens again, and I imagine the willow herb will dominate the borders. With the new growth of our wild flowers and grasses, we should see the return of some butterflies after their hibernation. This being my first spring here, I'm interested to see which species appear in the gardens. I'm hoping to see two of our earliest butterflies, the comma and orange tip, which are fairly easy to identify, the comma having its characteristic jagged wings, and the male orange tip, with its white wings and vivid orange marking on each forewing. 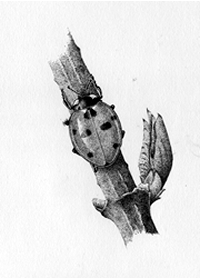 During the warmer days in February, some ladybirds emerged from their winter dormancy. This was too early for them with their being few, if any, insects and aphids to feed on. They will have seen the winter through relying on their fat reserves built up at the end of last summer, and as far as I am aware these ladybirds are able to return to shelter from the early spring frosts until warmer weather returns. There are around forty species of ladybird in this country suited to different habitats, and in our gardens you will find several of these. The majority of ladybirds are predatory, feeding mostly on aphids and other insects much to the gardeners delight.

Another favourite to look out for in spring is the bumblebee, which has also hibernated through the winter. Only the females hibernate, the males dying at the start of winter when the cold weather arrives. These females carry their fertilised eggs through winter, and once a suitable nest site has been found will start a new colony. Conservationists have been concerned about the decline of bumblebees over the last few years. With the loss of hay meadows and their replacement of grassland monocultures for silage, flower rich meadows are few and far between for the bees. Even in our gardens, which often act as mini nature reserves, the obsession with neatly mown lawns can impact on the bees' food supply by preventing clover and other grassland species from flowering.

Look out for our summer migrants as they return for the summer. A recent programme on the radio has been tracking these migrants through Africa and Europe as they make their way here. It is almost a relief to see the return of the swallows and house martins, to know that we have left the cold of winter and early spring behind us. There are lots of other migrants that might not be as familiar such as the chiffchaff, willow warbler and wood warbler, birds usually identified by their song rather than a sighting. One migrant that everyone will be familiar with is the cuckoo which I hope we'll hear in the next couple of months.

That's all for the spring edition. I hope you can get out and see some the wide variety of wildlife around us in the gardens and surrounding grounds. This is my first spring here and I'm looking forward to seeing the seasonal changes as the trees break bud and everything starts to grow again. It's also an opportunity to listen out for any new birdsong so that its owner can be added to the list for the next edition. Enjoy the spring and summer and I look forward to the next article with hopefully more to share with you.