5 Aside Football (with a slant) 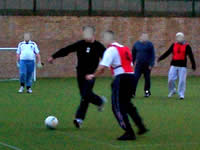 This is played twice a week on a Monday and Friday and follows the format below.

Whoosh! Another ball goes over the fence. " I′m not getting that. Says Jack. It′s the third over the fence this week! As far as I′m concerned the local kids can have that one." But it didn't stop four of the boys offering to go and get it!

The game continues, Arnold makes his usual demand, pointing to his feet for the ball to be passed directly to him so he doesn′t have to run for it. Jack falls to the ground, pulling the usual leg muscle but lasting longer this time than the customary 4 minutes. A ball lands on the roof, to join the 27 already stuck up there —we hope "Estates" don′t mind getting the ball down again!

"That′s 8-2". Says Henry as he puts another in the net. "No it′s not it′s 8-3". Shouts Harold. 5 minutes goes by and after a deep discussion about the disputed score everyone settles on 7-4!

"Handball"! Harold exclaims. "How can it be handball"? Shouts Albert. "He′s the goalkeeper! Harold retains a stony silence.

Another "purrfict" save by "The Cat" from Arnold who says "I′ll slip you a fiver if you let the next goal in!"

This is a snapshot of a game in action, the player′s identity is hidden not only for patient confidentiality but because we all look like or are very similar to David Beckham. We could do without the fans and paparazzi making a fuss. Also we bend it better than Beckham....the truth.

The football is played come rain or shine. In fact football was played once in torrential rain and every one was soaked through. This led Trisha, Nurse on Cardigan ward to exclaim to Craig, the activity coordinator. "You will be to blame if someone goes down with pneumonia!"

There are usually 10 to 12 staff and patients who play football and there is a big debate regarding how the teams will be picked. Henry suggested that the two goalies pick the teams and due to one player being better that the rest that there would be one first pick and then two players chosen for the second pick. However when this was done Harold complained that the teams were still not fair and the teams were changed yet again "Oh for an easy life!"

Finally, the nets are more holy than righteous and we ask KarlH to get new ones so that we know when a goal is scored!