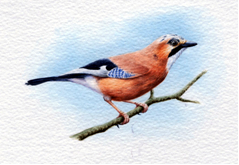 Welcome to the Christmas issue of Twitcher and hopefully something new for you to look out for in and around the clinic. After the last issue I thought I′d struggle to add more to the list, but I′ve seen more birds by chance than when intentionally going out to see what′s about, as is usually the case.

After a mixed summer I kept an eye on our most noticeable migrants, the swifts, swallows and house martins, to see when they left for Africa. I saw my last house martin at the end of September, the swifts and swallows having left earlier. The house martins seem to leave it to the last minute, even when the days have turned cooler and you think there can′t be much food about.

The buzzards were a regular sight throughout the summer and autumn, using the thermals to lazily quarter the ground for food. Occasionally the crows and jackdaws mobbed them but it seemed to have little effect and the buzzards would dip in flight and carry on without much concern. The kestrels and sparrow hawks have also been regulars during autumn, perhaps because of the number of young birds that have been successfully reared. 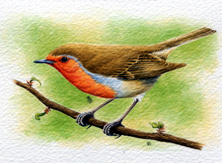 I heard the jays before I saw them in the trees by the river, along with the laughter-like call of the green woodpecker and the sharp rapid call of the great spotted woodpecker. Birdsong and calls help fill in a lot of the gaps when there seems to be few birds about. While walking in the grounds, the jays have been quite bold while collecting the beech mast which they bury for the winter. They are probably more concerned about the other jays that watch where they bury their cache, and then pinch it the minute their backs are turned.

Long-tailed tits have been busy feeding in the grounds, usually in small groups flying from tree to tree. I watched them feeding in Cardigan garden one morning in late September along with at least fifteen or more other common garden birds. The garden was alive with birds for ten minutes and I wondered what had brought them all together at that particular time.

Other regulars seen flying over the grounds have been the heron and the slightly reptilian looking cormorant, its flight giving the impression that it hadn′t expected to get so far off the ground and was terrified at the thought of having to land at some point. For some time now, cormorants have become much more common inland, and have colonised lakes and rivers which hasn′t been welcomed by fishermen and the fisheries stocking the water. 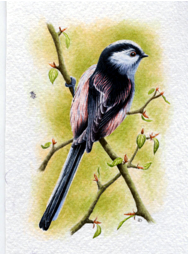 In the gardens the wildflowers have mostly died back after flowering with a few persistent annuals which continue to flower until the frosts become too severe. This decline sees the last of our butterflies for the year. In the second week of October I saw three red admirals which were in perfect condition and must have only just emerged from their pupas. This butterfly was still present in the gardens in mid-November on cold but bright days. These sadly will not survive the winter, but others such as the peacock, small tortoiseshell, brimstone and comma are able to hibernate through winter and will appear again in spring.

Also with the decline of insect life, the bats in the area will also hibernate with maybe the occasional appearance on very mild days. Bats along with dormice and hedgehogs are the only British mammals to hibernate choosing a different roosting site to that of the summer. So even in the middle of winter when everything looks quite bleak and barren, there is an abundance of wildlife seeing the winter through and waiting for spring.

Well that′s it for another issue. With most of the trees now bare it is the perfect time to see more of our native birds, and also a few winter migrants such as the fieldfare and redwing. Also with the colder weather it is an ideal opportunity to watch birds at close hand on the bird table, not forgetting the robin, our seasonal representative.

I would like to wish you all a merry Christmas and a happy new year, and I look forward to the next issue in spring with hopefully more to share with you.