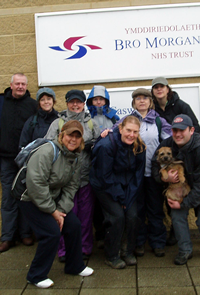 As you are probably aware Angie Gower went on Holiday to go deep sea diving in the Red Sea. Unfortunately when on a dive she had an accident, which resulted in a hospital stay, and substantial medical costs. Fundraising activities to help raise money for Angie′s costs have been arranged and supported by people both within and outside the Clinic. Fundraising activities included a sponsored 15 mile walk (see article below), raffle of a silver bracelet, Sponsored hair cropping (well done AllanS), and a RobE sponsored band evening (Link here 2 there). Many thanks to all of you who so generously contributed to the Appeal.

On Sunday 4th March 2007 a sponsored walk was organised to raise funds for Angie Gower. Nine members of staff, and one dog walked from Caswell Clinic to Nantymoel and back. This is their story.....

The explorers gathered at Base Camp Caswell. Rain clouds collected above, but they worried not, for they were prepared. Armed with coffee, crisps, chocolate, and wet weather trousers, these brave individuals contemplated the task ahead. Their confidence boosted by the knowledge that if trouble arose, Foley – the brave and wise border terrier- would rescue them.

The group were in cheerful mood as their journey began. The rain tried to fall but it was pushed back by the high spirits of this modern day band of brothers (and sisters).

Marching through the reddish grey of Ynysawdre and greenery of Brynmenyn the troop felt that nothing could stop them. The power in the high waters of the river Ogmore that flowed beside was akin to the strength in their legs. As the currents of the river would take it to the sea, their legs would carry them to their journey′s end.

Although planned in great detail, the group knew certain aspects of the trip were bound to change. The "stop for a quick cuppa" was soon abolished, for fear that once resting, the walkers would not restart.

The route from Blackmill to Ogmore Vale was to provide the weary team with further challenges. From here on in the gradient of the track would increase, along with the pain in their thigh muscles. It was also at this time that the rain stopped being threatening and soaked the walkers instead.

Once passed Ogmore Vale, the team could see the half way point getting closer (well that was the case when they decided where Nantymoel was). After quick stop at the Wyndham Arms for a photo, sandwich, and confirmation that the destination had been reached, the brave souls began their return.

Wet, aching, chafed legs did not dampen the determination of the walkers as they made their way back to base, arriving 5½ hours after they departed. The experience had taught them many life lessons, especially, "Cars are dryer, more comfortable, and less tiring".

Thank you to those who walked (Ray E, Leah E, Elizabeth P, Tina G, Heather E, Dena B, Tracey B, Heather G, Huw P, and Foley), and those who sponsored and supported them.