The ward′s open day had its third anniversary this year. It was well attended and gave the ward community the chance to demonstrate the good work that happens on the ward. Each year is different. The community influences the kind of ideas that are generated and we learn from the previous years′ events. Somehow it all comes together on the day.

The preparation required to arrange the open day is enormous. Most of it is done in the weeks leading to the open day but the final touches inevitably happen as the clock ticks down. It is frantic!  However everyone comes together and we manage to pull it off. Special mention has to go to Val S, Angela E, Kay M, Tommy P, Kyle T, Rob S, Andy H and David F. Additional mention to all that prepared the ward and added the finishing touches to tables and display boards.

This year we concentrated on a lunch menu as the main event. With the support of Lisa R and Mags we were able to commandeer the ward kitchen to serve hot soup, mince pies, welsh cakes and fruit punch. Hours of effort were put into the cooking and preparation. As well as rushing to Bridgend to purchase a blender with ten minutes to spare. The menu was a huge success with a steady stream of visitors enjoying a Xmas treat.
MikeS Cardigan ward manager

Angela H performed brilliantly as ward hostess and chief raffle ticket seller. The prizes are varied and many. Special mention must also go to the patients who have created two hampers and nurses who have supplied another. David F donated four original paintings to the ward, three of which were sold on the day. Another, larger painting remains on auction to the highest bidder until the 21st December. The current highest bid is £40. 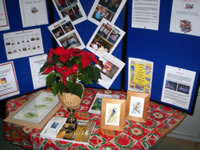 The main goals of the open day are to highlight the achievements of the ward over the year and recognise those that have contributed significantly to the ward community.  Over the last year the ward has produced a welcome booklet for new patients, an intranet webpage, organised four theme nights, contributed numerous articles to the Caswell Chat (nine patients and 10 nurses), won the Friends of Caswell Quiz and the Caswell Sports Club Cup and received commendation from the Koestler Awards for a group project. The ward has played a leading role in coordinating therapeutic group work at the clinic, attained high levels of compliance with mandatory and statutory training and enjoyed reduced sickness levels over the second half of the year with an average of 2.5% sickness for the last four months. Resources have been committed to supporting student nurses on the ward. There are now thirteen registered nurses trained in the mentorship of student nurses.

The above for no sickness during 2007

Cardigan Ward has several ideas for next year. We intend to create patients′ stories in multimedia formats and generate income through a joint project with Ogmore Ward making briquettes from recycled paper for burners and barbeques. We will devise and facilitate a Citizenship Group which will explore themes of social inclusion, interdependence and social roles and responsibilities. We aim to modify the Island to enable patients to use it as an exercise and fitness area. That′ll do for now!

We look forward to reporting back on these goals at next year′s open day. Welcome and Merry Xmas.