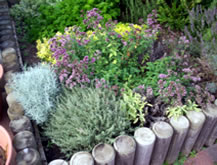 The Cardigan Ward Garden has suffered a bit of the same fate as the OT Garden. Not getting enough time to get out and tend to it, due to ground being out of bounds a lot of the time, or not enough staff, due to leaves or sickness. Having said that, I am very grateful to David and Andy, who had kept on top of all the weeding.

Never-the-less we had a great show of Red Hot Pokers, followed by Geranium's and Begonia's and an abundance of Fuchsia. We are not certain what had happened to our Gladioli, none have raised a head above the ground. Too much rain, followed by too little rain, I guess and the Red Hot Pokers needed cutting back, to give space and air to the ground, but we couldn't get out to do it. The other raised bed full of Nasturtium and wild Poppies, such as; Iceberg, Californian and Ladybird, grown from seed and Chrysanthemum, all put on a good display. We had also managed to plant four rose bushes in the borders, which have now taken and should show well next year.

The Lilies was a display of wonder and Andy's herb bed is a great success, full of Borage, Rosemary, Lavender, Apple Mint, Sage, Parsley, Thyme, Origami, Marjorum and a curry plant. In the Autumn, much work is planned to plant out Daffodils, Snowdrops, Crocus's, Bluebells and Tulips and the Acer will be cut back and moved, ready for the spring display and then summer, an abundance of colour is planned and maybe one bed with an oriental theme, just to please one of the patient's.

P. S. These are quite large articles, the Gardening Group has been a great part of my employment and a great deal of work has been given by all. I have grown with them and I have not only taught them, but they have taught me.