Having arrived at Caswell in mid-June, I have been surprised at the amount and variety of wildlife within the grounds. Being new to the article, I thought I might try and share some of my sightings of not only birds, but also the wider variety of wildlife I have come across since June.

After a reasonably dry spring, most breeding pairs will have successfully reared chicks, and I have seen, especially in Cardigan garden, several young dunnocks, blackbirds, robins and also a young house sparrow and grey wagtail. Some of these will probably have been a second brood, being at the end of July, or even maybe a third for the blackbird depending on how early they started nesting. The majority of our common garden birds take roughly two weeks to incubate their eggs, and then about the same length of time before the chicks fledge, so a successful pair on a good year could manage three broods.

The dunnock, a regular in the gardens, is at times quite a secretive bird, spending much of its time amongst the low shrubs and vegetation. With its brown back, grey head and under parts it is usually overlooked, but its vibrant song is similar to a wren only not as strong and more than makes up for any lack of colour. The wren was another visitor to the garden and could be seen hunting around the plants in search of insects. This is another secretive bird which you are more likely to hear rather than see, its song being rich and powerful putting a lot of songbirds to shame, especially with it being one of our smallest birds.

Many other common birds have been regulars. I have seen goldfinches most days and heard them in the surrounding fields and trees. A flock of goldfinches is called a "charm", and when you see and hear these birds together it is not difficult to understand why. During autumn and winter you will see these birds in flocks feeding on the seeds of thistle and various other plants. There are quite a few birds which I haven't seen, but their song and calls could be heard earlier in the summer. Chaffinches, greenfinches and great tits are regulars in the surrounding trees and you might have seen these in the gardens. The chiffchaff, a summer migrant, was heard at the end of June and early July, and at the end of summer this bird will return to southern Europe or as far as Africa. Now with the current trend of climate change, a few migratory birds are wintering in southern England where they must be finding a regular supply of insects.

Blue tits spent the wet July searching the undersides of leaves for insects in the gardens; these looked like young birds with their slightly shorter tail feathers and immaculate plumage. Pied wagtails and a host of other birds went into a feeding frenzy with the emergence of flying ants, darting about in different directions.

This eruption of flying ants is called the marriage flight, where winged males and females leave the nests in an area all on the same day, the mated females returning to an existing nest or starting a new colony, much to everyone's relief.

Thankfully, due to the grounds departments' naturalistic approach to garden maintenance, there is a wide variety of wild flowers growing amongst the shrubs and perennials. Willow herb dominated the borders with its bright purplish pink flowers, and it isn't until the long slender fruits release the light hairy seeds that you realise how much there is. There are lots of smaller wild plants in the gardens which are often overlooked but in their own right are just as colourful. Speedwell with its blue flower, the orange red of the scarlet pimpernel and the small yellow flower of hop trefoil and black medick grew in every garden. Wild angelica grew in several courtyards reaching five feet or more with its large white flowers. Also in a few of the courtyards I noticed Himalayan balsam towering above everything else with its purplish pink flowers. This is one of the garden escapees which are now growing wild after being introduced, and there is a national effort to eradicate this plant which spreads rapidly along river banks. Already it seems to have taken a firm foothold along the river Ogmore and the surrounding area, growing in dense stands which will prevent native species from growing. 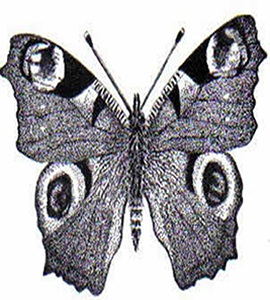 On warm bright days, several species of butterfly could be seen in the gardens. The ever present small white seemed to be in every garden whereas I only saw one or two small tortoiseshell, meadow brown and speckled wood. The peacock butterfly was also present in the gardens in small numbers, with its unmistakable blue, black and yellow eye spots on each wing. This butterfly will hibernate over winter in hollow trees or out buildings, emerging in spring to lay its eggs on nettles, the caterpillars' food plant. There is also a healthy population of moths which will have helped feed the young birds seen in the gardens, the caterpillars feeding on a wide variety of wild and cultivated plants, trees and grasses. The adult moths will have also provided an abundant food supply for the bats which I have seen flying around the gardens at night, using their echolocation to detect the moths. You are more likely to spot these bats at dusk, when you can see them against the sky on a clear evening.

That's it for this issue and hopefully you will see most of the birds mentioned and no doubt many more along with some of the other wildlife. If you can, put some food out on the bird table to help the smaller birds through the colder weather. For many it will be their first winter so every little helps. I hope you have found something to interest you and I look forward to sharing my observations of the rich variety of wildlife in the next issue.