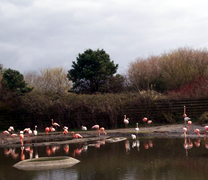 As this is hopefully the first of several articles for Caswell Chat, I thought I'd begin with a brief history of the Wildfowl and Wetlands Trust (WWT) and highlight what its only Welsh centre has to offer.

Founded in 1946 by the late Sir Peter Scott, WWT is the largest international wetland conservation charity in the UK. WWT's key aim is to save wetlands for wildlife and people. This is done through a wide range of programmes including running nine visitor centres in the UK -where children and adults alike are introduced to the wonders of wetlands and can learn more about them and their wildlife.

The WWT National Wetland Centre Wales (NWCW) situated in Llanelli, lies on the northern shore of the Burry Inlet, which is regarded as the most important estuary for waders and wildfowl wholly within Wales. Bird numbers on the Burry Inlet (or Loughor Estuary as it is also known) are at their highest during the winter months when up to 50,000 birds can be present. These include Internationally important ~ numbers of Oystercatchers, Pintail, Shever and Knot, and Nationally important 1 numbers of Brent Geese, Shelduck, Wigeon, Teal, Dunlln, Lapwing, Black Tailed Godwit, Curlew, Whimbrel (on migration) and Redshank.

NWCW opened in 1991, and the creation of a variety of habitats such as saltwater and freshwater scrapes, a six acre lagoon, landscaped grounds and reed beds provide habitats for a wide variety of birds. In 1999 the reserve expanded with the creation of the Millennium Wetlands, which is part of The Millennium Coastal Park (MCP), a £28 million development, stretching 12 miles from Loughor Bridge to Pembrey Country Park along the coast of the north shore of the Burry inlet. The site covers an area of 200 acres and has been transformed from low grade agricultural land into deep water lakes, shallow scrapes, reed beds, wet meadows and ditches. Target species for the site include Bittern, Marsh Harrier, Little Egret, Spoonbill, Cetti's Warbler, Black Tailed Godwit, Redshank, Lapwing, Oystercatcher, Skylark and Kingfisher.

To date, bird numbers have generally increased annually and the site is now the best place in Wales to see Little Egret, which is now resident. This one time rarity has increased annually since 1994- when 13 birds over-wintered for the first time -to a Welsh record 392 in 2005. Other normally scarce residents include Black Tailed Godwit and up to 750 have been recorded. To date, 199 different bird species have been recorded, 58 of which have bred on site. Visitors can expect to see over 40 species between May and July -over 50 species between August and April.

NWCW was also designated a National Key Site (NKS) for Water Voles in September 2005- making us the fifteenth NKS in the UK and only the second in Wales, the other being Malltraeth in Anglesey. The role of the NKS network is pivotal in helping arrest the dramatic decline of the Water Vole -the UK's most threatened native mammal.

The reserve also has a lot to offer its human visitors too -including Landscaped grounds and a brilliant and colourful collection of over 700 ducks, geese, swans and flamingos from all over the world -many so tame they'll feed from your hand! Specially created pond dipping and other educational areas .Children's play areas. The visitor centre -with its teaching rooms, water and wetland displays, observation tower, restaurant, eating and sitting areas, toilets, shop and spectacular views over the estuary and waters. Excellent access, reserved parking and wheelchairs available for disabled visitors.

One of the most frequently asked questions is -What's a good time of year to visit? To which the answer is anytime -each season brings with it new and exciting things to do and see

Winter- is probably the best time to visit -for its large numbers of birds.
Spring -is when the breeding season commences and the birds are in their brightest plumage.
Summer- many chicks are seen around the grounds and plants such as Southern Marsh Orchids and a variety of Butterflies, Dragonflies and Damselflies are in abundance.
Autumn- is when the grounds are most colourful and birds gather in large numbers -summer visitors will be preparing to depart while some of our wintering birds will begin to arrive.

At the end of November 12 patients and staff from Cardigan ward visited "The National Wetlands Centre Wales". Although described in full below, the centre aims to save wetland areas for wildlife and people. We were ably shown around by Dominic. The tour took about an hour as we looked at all the wildlife and saw some whooper swans that had migrated from the hide. We ended by having lovely buffet. We all really enjoyed the trip and will go again in the future. Finally, I am pleased to say that the trip was funded by sales of our concrete products which made us feel doubly rewarded.

Inside the 2006 Caswell Chat