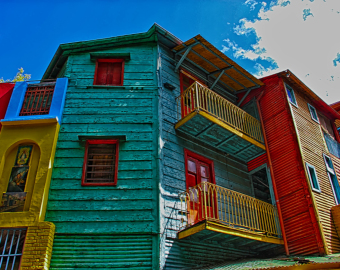 I was very flattered to be asked again to write an article for Caswell Chat. Last time I was asked to describe a typical working day. This time I have been given a bit more freedom and I thought that I would tell you about my recent trip to Argentina to talk about forensic mental health services in England and Wales and in particular the Caswell Clinic. I was asked to do this, as my understanding is that there are no such services in Argentina or in the whole of South America.

This issue is currently very topical in Argentina and there are discussions taking place as to how a service can be developed. In Argentina if you are suffering from mental illness and you are in prison then that is where you will stay. I spoke to one Dr who unfortunately could not speak English and unfortunately my Spanish is limited (to asking "where is the bank " and "two beers please and my friend will pay"), who told me that he works in a prison of 3000 people. Of those 3000 people l000 people are located: in the prison hospital. Having spoken to people in other parts of the world it seems that the forensic mental health services we have in Britain probably represent the best in the world.

So this is how I found myself invited to be the keynote speaker at the l2th South American International Psychiatric Congress, at the end of last month. As I talked it was simultaneously translated into Spanish and was held in a very posh room in a large hotel in Buenos Aries. I talked about how services in Britain have developed over the last 200 years, that there is a lot of history that has contributed to the present configuration and philosophy. I then spoke about government policy and how this had shaped service development. Finally I spent some time talking in a lot of detail about the Caswell Clinic. I was able to show pictures of the Caswell Clinic as I think it is important for people to realise how important the environment is for people who are recovering from mental illnesses. It is quite striking how the Caswell Clinic from the front, does not look like a secure unit.

I was able to show design features that had been contributed to by previous patients at the Caswell Clinic, which allow the building to let in more natural light. I was able to show the bedroom areas, which allow people to have privacy and dignity. I also showed pictures of the gym and sports hall, which helped people to keep fit and to manage side effects of their medication. I remember feeling an enormous sense of pride in showing these pictures. However I did not shy away from outlining that there are still very many ongoing problems with service provision and that we still send many of our mentally ill people to prison despite a 200 year history of policy development that was meant to stop that happening

At the end of the conference I was able to spend a few days holiday in Argentina. As well as the usual sightseeing I was able to try "mate" which is similar to tea but different in the sense that the cup is shared between friends and it is drunk through a straw. I also ate a lot of beef, which is probably the main food in Argentina, and cattle are abundant on the Argentine pampas (flat grassland). It is cooked on a "parilla" which is like a barbecue, and to order your food you point to the part you want on a diagram of a cow. I did think about going to Tango lessons but then I thought to myself "who are you kidding".

The Argentineans were lovely, patient and hospitable to me without exception.

Inside the 2004 Caswell Chat