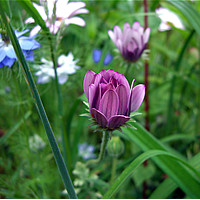 Hello to you all and welcome to spring, which is officially here on the 21st March. The garden has other ideas though as spring has arrived early. Despite a cold snap this winter it has been a fairly mild, if wet winter. The cold period made the daffs bloom better as they knew it was winter. Some plants need a cold spell to make them perform well. On the opposite end, some need hot summers to harden the wood and make them blossom better - watch out for good cherry blossom following last years fairly hot and dry (in my part of the world anyway) summer.

Daffodils like all flowers that make seed benefit, from dead heading (removing the seed head, as shown in the photograph) something not many people do. Leave them for about six weeks or until the leaves die down. During this period give them a bit of a feed and it will help produce better flowers next year. The plant uses the energy in the leaves to rejuvenate the bulb and build a better plant for next year. Along with not planting them deep enough cutting off the leaves to soon is the biggest cause of no flowers.

So to veg, my reputation is on the line as I have promised everyone carrots, something that the garden has failed to produce apparently; if I cannot produce carrots I will have to take full responsibility. I think it has been down to a number of things all of which I hope can be overcome this year. So watch this space or more importantly pray hard for carrots.

Now is a very busy time for seed sowing and pricking out (the term used for taking the little seedling and moving it to a bigger pot or tray). Trays called six packs are mostly used these days as they save space and plants can stay in them until sold. I have brought some freebees from college so the greenhouse is already looking well stocked. The garden team have their work cut out with tending them.

We are going to sow some hardy annuals in the garden this year, which is a simpler way of producing a good display. The area is prepared and raked and the seeds are sown directly into the ground. There are two ways of doing this, straight lines and what is called broadcast which is scattering. Straight lines may seem odd but they are easier to weed as you can tell which is the plant, and, when they grow larger they all mingle anyway. When you broadcast the weeds and the seed are all mixed up and weeding can be a bit of a nightmare.

The shops have been full of bedding plants for some weeks and people are rushing to buy which is ok if you have a heated greenhouse to put them in but it is far to early to put them out or in a cold greenhouse. They have been grown at a temperature of approx 18-20ºC and need to be cosseted for a while yet. May / June is about the time for them to go out when all risk of frost has gone. Mind you the shops prosper when you buy them and lose them then go back for more; so do not be to hasty to plant but buy and cosset if you wish.

The same things apply to your hanging baskets they can be made any time from now on but they need to stay in the greenhouse until it warms up. Here in college we make hundreds and run courses in the evenings where people make a basket and take it home with them. The greenhouses look wonderful when all the baskets are filing out and ready for collection.

Well that's all for now or the garden will never get done.

Inside the 2003 Caswell Chat