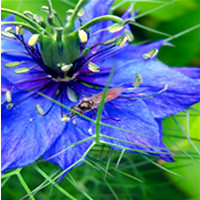 Welcome fellow wildlife aficionados, you will probably notice a change to the style of this article compared to the usual 'Nature Watch', this is because Rob is convalescing from a recent bout of serious coronary trouble and consequently has to "take it easy" for a while. He sends his apologies and best wishes to all readers. Therefore I, Lyndon, was asked if I would stand in for him; Rob will be a "hard act to follow", I only hope I can match up to his high standards.

First an update on the resident cat mentioned in the March article. Rob originally started putting out cat food, bought out of his own pocket at first, to hopefully try to stop her predating on the small birds and field mice. As a result of this, over a number of weeks, the cat became so tame that as soon as Rob sat to do his yoga, "Snowy" (she was all white), would jump on his lap and demand attention, and later when Rob was in the P.O.W.H. she did the same with me. This behaviour was noticed by Jackie (the Ffaldau ward manager) who is a "cat person", and as we could not have Snowy as a ward cat owing to there being asthmatic patients Jackie put a circular around the clinic describing Snowy and asking if anyone was interested in adopting her. There was a positive response from Elaine. I managed to get Snowy in a cat basket but she did not like it and yowled loudly and continuously, but later when released in Elaines home, despite there already being a cat in residence, she jumped up on the settee and settled in immediately. Look out for an update on Snowy, now renamed Cassandra, in the next issue.

Ffaldau ward garden is "alive" with birdlife at present. I go out to feed them every morning between 6-30 and 7-30 and they descend like vultures, I feed them mostly on left over sandwiches, meat, fish and scrambled egg as well as seed for the seed-eaters. Normally you would not feed wild birds at this time of year but in recent years there has been a dearth of natural food due to climatic change (note the lack of cuckoos this year) and the RSPB have advised people to carry on feeding them. I chop the sandwiches and the meat up very finely by "blitzing" it in a food processor adding a little bread so that the meat does not bind into one big lump. They are particularly drawn by the scrambled egg, which disappears in minutes. A carrion crow has been attracted to the garden by the food and he is very much top of the pecking order, he is also very territorial, he particularly dislikes magpies and chases them off with gusto, even attacking them in the air. The only birds he tolerates in "his feeding area" are starlings and smaller birds, also what must be his own fledglings and his mate who have started coming recently. He attacks the squirrels as well. He is very much a "godfather" to the smaller birds. I am very much surprised at the number and variety of birds that come to feed and it goes in "minutes", there are starlings and their fledglings which are very numerous and always squabbling over the food, innumerable jackdaws and their young, quite a few sparrows, both house and hedge who also bring their young to be fed, ditto a number of blackbirds who at first fed but now chase away their young, there are a pair of song-thrushes and young, a number of chaffinches again with their young who surprisingly eschew the seeds for meat, a pair of bullfinches also come for the food but I have seen no young as yet. The collared doves and their young surprisingly also feed on the meat/bread mix, I had always thought they fed only on vegetable matter and seeds. There have not been many summer visitors to be seen as yet with the exception recently of a number of swifts. The squirrels have also bred successfully, one morning there were two adults and five young, the adults being very protective, chattering loudly and literally "flying" at the magpies and jackdaws if they came too close.

A young fox has also been attracted by the food, (I throw a very little beyond the railings for the shyer birds), it snuffles around in the undergrowth after the morsels of food taking no notice of me whatsoever, provided I do not move. Adult foxes are to be seen occasionally in the meadow as well but they do not come close to the garden.

The only other notable sight has been that of a red kite, it was only to be seen in the evenings and was mobbed immediately it appeared by a pair of carrion crows, it does not usually come very close to the garden but this morning (May 25th) it swooped low over the garden several times as if surveying the food, kites are carrion feeders after all and it must have been drawn by the sight of the other birds feeding, but it was not given a chance to land as the crows mobbed it practically as soon as it appeared.

Inside the 2002 Caswell Chat